How small things can change the world and make a history!

In the light of successful $TWTR IPO, here’s something useful and unique that #Twitter started quite a while ago.

Here’s the #infographic history of #hashtags

It’s time that #wordpress starts supporting it, too.

This is rare footage of Steve Jobs conducting a presentation in 1980. It is clear from this footage that he already had a vision and strategy where to position the company, Apple Inc, in future. 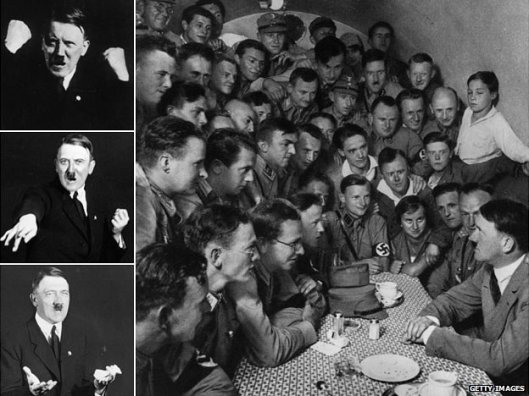 Any attraction to the dark personality as Hitler‘s, it is really hard to comprehend. It is also hard to imagine, how he could hijack the whole nation, almost as if hypnotizing each citizens. Well, there are many ingredients, which paved path to tragic disaster as Second World War. Yet it was his charisma and economic reality which led to put him as a Führer of great nation, thereby contaminating its culture to see the whole mankind as its sole enemy.

In an economic crisis millions of people suddenly decided to turn to an unconventional leader they thought had “charisma” because he connected with their fears, hopes and latent desire to blame others for their predicament. And the end result was disastrous for tens of millions of people.

Harvard researcher Karen King today unveiled an ancient papyrus fragment with the phrase, “Jesus said to them, ‘My wife.’” The text also mentions “Mary,” arguably a reference to Mary Magdalene. The announcement at a religious studies conference in Rome is sure to send shock waves through the Christian world. The Smithsonian Channel will premiere a special documentary about the discovery on September 30 at 8 p.m. ET. And Smithsonian magazine reporter Ariel Sabar has been covering the story behind the scenes for weeks, tracing King’s steps from when a suspicious e-mail hit her in-box to the nerve-racking moment when she thought the entire presentation would fall apart.

Read more: The Inside Story of a Controversial New Text About Jesus | History & Archaeology | Smithsonian Magazine.

There were many attempts to explore Mars using Space missions. As of July 2007 the success rate was 47%. Interestingly, Soviets were the first to attempt it, but Americans were the most successful ones. In coming centuries, the exploration will look different with China and India coming into play. The following infographics tells the whole story:

Source SPACE.com: All about our solar system, outer space and exploration

Letts Bicentenary Diary is no doubt one of the most beautiful nostalgic planner ever created. It looks to be absolutely well-made. Plannerism gives an excellent review and that makes me wanna have it soon. It’s limited edition with only 2000 prints. If you want to own it, you should go to Letts Web Store to order it. There are only 9 in stock at this moment, so hurry up!

Five decades of its excellent service to astronomy and astrophysics is well documented here: Five Decades of Parkes Telescope

Posted by calculi | Filed under History of Science